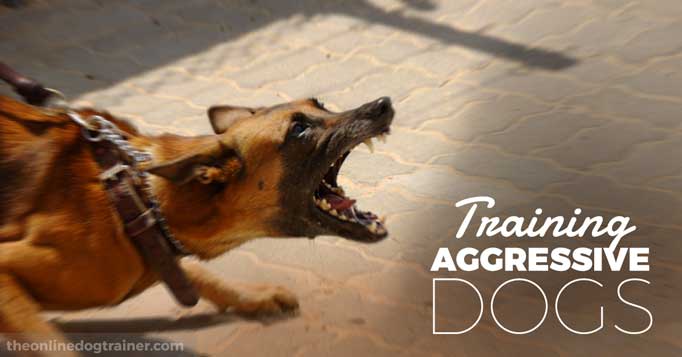 Over the years, I’ve worked with thousands of unruly and aggressive dogs who were hostile to other dogs. And that’s what this is about…understanding dog-dog aggression.

One encounter that sticks in my memory is a Great Dane Border Collie cross, who weighed close to 80 kg and was so aggressive that when I brought him out of the car on a double leash my dogs hid in the bushes on the far side of the park.

On the other end of the spectrum I’ve also seen tiny little dogs snap away at my biggest dog Jack whilst he calmly ignored them and carried on smelling the flowers!

And from these experiences, I’ve learned that size, breed, color, etc., tend to have nothing to do with why a dog is aggressive.

With that in mind, I know that when working with an aggressive dog, I have to answer a few questions…

‘Why did they do what they did?’

‘What was the goal of their aggression?’

If we can answer those questions then we get a better understand of where a dog is coming from and then form an approach that will help them start to relax and overcome their aggression.

Now clearly, there are many different reasons why a dog may be aggressive. They may have a fear of something happening, their aggression may be linked to some previous abuse, they may feel threatened, be protecting something or somebody or simply have a serious lack of confidence.

If I tried to go into all of those problems, we’d be here for days.

So, today my focus is going to be on how to better understand the difference between dominant and fearful aggression– two of the most common types of aggression and then you’ll be able to get an idea of what you can do to help them. 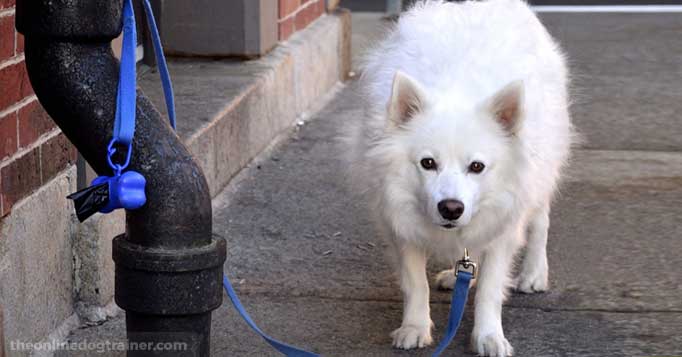 There is a saying that there is only love and fear and with fear based aggression this is certainly true!

So let’s take a look at what fear based aggression actually means and what may have caused it!

Firstly, it’s possible, but unlikely, that a bad experience in the past is the cause of the issue. I say this because many dog owners who adopted their dogs late and have aggression issues seem to think that it must be related to abuse that they know nothing about. However not only does this rarely makes sense but it also leaves them feeling helpless to solve the problem (and I’d like to suggest that there is hope!) On further questioning they confirm that for the first few months during which they had their dog the dog was fine socialising and playing happily. This is rarely the cause of aggression.

So why does fear based occur?

Well, the vast majority of fear aggression is triggered when a dog feels there is a threat of harm to themselves or one of their loved ones be it a puppy or human–and yes that could be you, the owner.

So, if your loyal companion feels you’re in harm’s way, this aggressive fear-based behavior can come out of nowhere to protect you.

Now, a simple indicator that this could be the case is if your dog only reacts like this when you are with them. So, if your dog is aggressive to other dogs when you walk them but they’ll walk and play happily at the dog park when other people take your dog, this is likely to be what’s going on.

And last but not least it’s important to point out that this sort of fear-based aggression can arise for absolutely no reason.

A dog doesn’t have to be abused or fear their owner in danger to suddenly experience fear-based aggression.

So why does it happen? We may never know…

A dog’s brain is very complex, there are 160 million neurons in the cerebral cortex part of the brain alone. To be able to always point to what happened that caused a dog to react with fear-based aggression is impossible.

Think of it this way…

I have a sister who is deathly afraid of birds. My other sister fears spiders. Now, there was never any incident in which either of my sisters had a bad experience with birds or spiders…they simply have irrational phobias.

And the same irrational phobias can develop in dogs too.

Now sometimes the aggressive dog may be a little bit confident and proactively seek out other dogs.

Their tails are often up and their chests are puffed out! A generally fearful dog who finds that little bit of confidence for a few seconds may charge and run 100 meters to get to get to another dog.

Out of fear, they are looking to “get the first punch in” and actively go looking to do it.

On the flip side, some fearful dogs are not confident at all. Period. Their tails are down between their legs, and they won’t leave their owner’s side. They’ll do anything to avoid you…they turn their heads and move away and try to avoid eye contact.

Less confident dogs like this that are fearful will snap, bite or bark only if another dog or person gets too close.

Any type of fearful aggression should be taken seriously. That’s because any fear-based aggression can easily result in actual injury to either another dog or a human.

How do you fix it? We’ll get to that in a minute after we talk about dominance-based aggression. 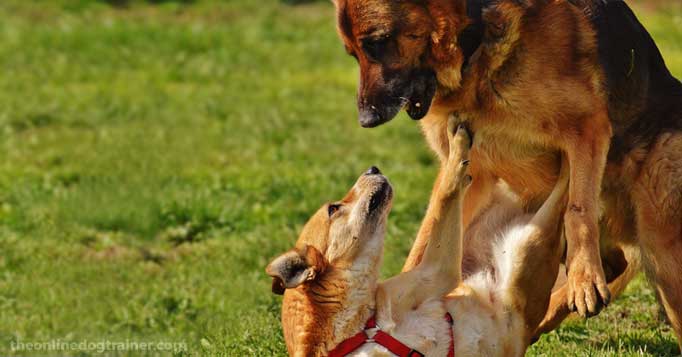 Aggression to establish dominance is completely different than fear-based aggression.

Dogs instinctually have a structure or hierarchy. And some dogs take this hierarchy more seriously than other dogs.

For example a very dominant dog who wants to be in charge may try to state their position over another dog who’s more submissive. Now generally speaking, so long as the dominant dog gets their own way they’ll be happy. But, if they meet another dog who thinks they are in charge too, then they may need to sort it out.

Usually there’s a couple of seconds of grizzle or an air snap, and it’s all over. That’s it. Done!

Now the good thing about this type of aggression is that it often doesn’t result in injury between the dogs. This is because it’s more of a test of strength than anything else–like two guys having an arm wrestling contest to find out who is stronger.

And so often that hierarchy is established with no aggression at all.

For example, if a dog slowly rolls over and lies on their back, submissively bearing their soft underbelly, it’s all over, nice and peaceful.

It’s when both dogs stand their ground that it can get slightly gnarly. While the more aggressive behavior is not pleasant to watch–may include some terrible noise or a bit of flying hair–it still rarely ends in serious injury to either dog.

Fun fact: Size has very little to do with dominance! It’s just like people…there are some very dominant small people (Napoleon wasn’t a big fella!), and there are lots of very submissive larger people.

The Solution to Both Fear-Based and Dominance-Based Aggression

The easiest way to get rid of aggression in both fearful dogs and dominant dogs is to remove them from the role of decision maker or pack leader.

Think about it, with dominance-based aggression, if your dog thinks he’s in charge, he’s going to be checking up on all the other dogs with far more attitude. I see it all the time where dogs are running around with chests out and tails up, checking the other dogs out in a very business like way, like it’s part of their job. Remove that role and they will be far more chilled out.

Analogy: I play soccer. I’m not the captain; my mate is. That means that before we kick off there are certain things my mate, Craig, has to do–go to center circle, shake hands, flip a coin, choose an end, chat to the ref–then he returns to his pack/team.

It’s the same with a dog. When a dog thinks they are in charge, he feels there are certain things he has to do–one of them is go check out the other dogs and decide who’s dominate and who’s submissive.

On the flip side, if he knows you’re in charge, he can relax and trust that you will do any sizing up that needs to be done. There is no need to puff out the chest and go and check out all the other dogs.

The same goes for fear-based aggression. In order to get rid of this aggression, your dog has to understand that you are in charge and in control of what’s going on.

So, like a human would turn to a leader in a difficult situation, it’s important that your dog trusts you that you will protect them and have their best interests at heart.

This can take a bit of time, but then they’ll follow your lead, and you’ll be able to keep your dog’s focus on you when it really matters.

So, in a nutshell, whether your dog has fearful aggression or dominant aggression, I suggest spending less time training your dog and spend more time establishing yourself as a calm and gentle leader.

It’s as easy as that!

If you think you’ve discovered the cause of your dog’s aggression and would like help getting your dog to calm down and look to you for direction when he becomes anxious or upset, I want you to check out my program called The Dog Calming Code.

This program has helped me train over 37,000 dogs–many of which have had various types of aggression issues.

Or, if you have a puppy I invite you to give my Puppy Coach training program a try instead!

I wish you the best!

3 Common Misconceptions About What Makes a Dog Aggressive

The Ultimate Guide to Dealing with Dangerous Dog Aggression Issues

Fear Aggression Training: The Amazing Ability for Dogs to Change

Pet Food or Pet Fooled? A Look Inside a Questionable Industry