3 Common Misconceptions About What Makes a Dog Aggressive 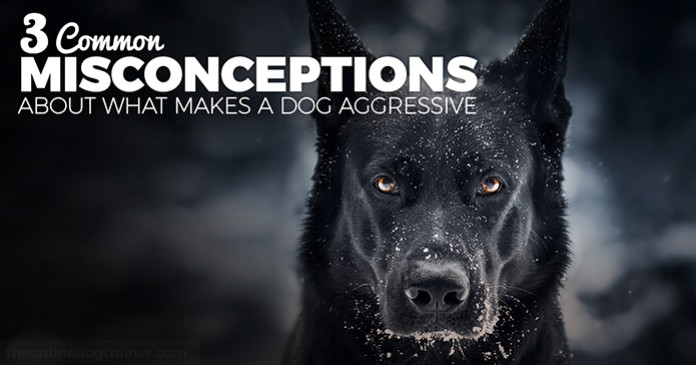 If you watch the news or read the paper, it’s likely that you’ve come across a story about someone getting attacked by a dog.

And I bet you that 9 out of 10 times, the dog in the story is some sort of large male dog—perhaps a specific breed, like a Pitbull or German Shepherd.

While I don’t doubt that these stories are true, the media seems to have a way of twisting around facts and creating misconceptions about why attacks like these occur. Even worse, these types of stories often stigmatized various dog breeds, dog sizes, gender, etc., with an unfair reputation.

As a dog trainer, I’ve worked with thousands of different types of dogs (check out how I’ve trained over 37,000 dogs here!), and I know that there are a lot more factors associated with dog aggression than the usual ones that keep coming up…

So, today I wanted to talk about three of the biggest misconceptions about what makes a dog aggressive. Do you believe any of the following myths?

Keep reading to find out…

As humans, we tend to think of females as a gentler, more nurturing sex. On the flip side, males tend to be classified as the more dominant, rough and tumble gender and yet here are the stats that I recently found during a survey that we carried out.

Now before you draw the conclusion that males are more aggressive…This result means that out of 30,000 dogs, close to half of them were female. With all the other factors that go into the mix such as people buying male dogs specifically for status, protection, and being guard dogs there is clearly more to this issue than it being a male dog issue.

In fact, a study from Psychology Today looked at male dog vs. female dog aggression and proved flat out that the idea that male dogs are more aggressive (despite testosterone levels) is not accurate at all.

Here’s a snippet from the study that explains why…

“Science does not find that the issue of sex differences in aggression is simple and always predictable when it comes to dogs. Evidence suggesting that male dogs are more aggressive is consistent with the fact that aggressive behavior can be triggered by testosterone, the principal male sex hormone.

In dog versus dog aggression, it is true that male dogs do posture, threaten and challenge each other more than females, though this is largely ritualized display aimed at establishing social rankings. While it can be disturbing and embarrassing to the respective owners, serious injuries to the dogs are rare.

The females are actually much more intent upon exercising their dominance and while males can forgive an occasional transgression of canine protocol or a failure to recognize their status, females do not.

This explains why actual fights are more likely to break out between two females and these often occur without much advance warning. These fights between females are more of a “no holds barred” affair rather than the male ritualistic fighting that includes snapping at the air in front of the opponent or using inhibited bites to threaten rather than to maim.”

In a nutshell, both male and female dogs have the potential to become aggressive, as the results from our survey showed.

It’s clear that aggression is much bigger than just a male dog issue.

Misconception #2 – Large Dogs Are The Most Aggressive Dogs 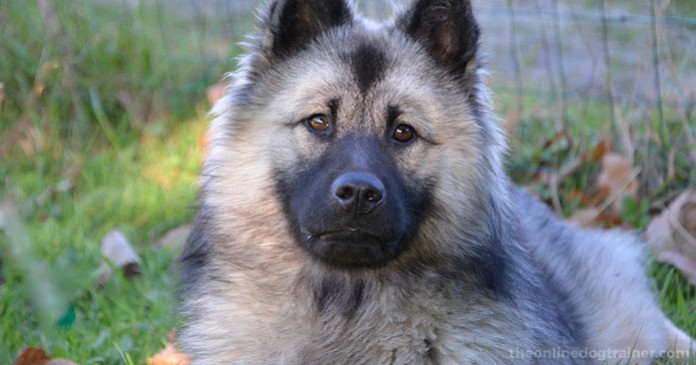 The second misconception is that large dogs are more aggressive than small dogs.

The main reason this is, is because when a large dog attacks, they tend to do more damage (biting, scratching, etc.) than a small dog.

Because of this, attacks via large dogs that lead to severe injuries or even death are publicized more than smaller dog attacks that might only result in bruising or a few stitches.

See how easy it is for our perceptions to be skewed?

What might be even more shocking to you is the suggestion that smaller dogs actually tend to be more aggressive than larger ones.

In fact, a study from the University of Veterinary Medicine in Vienna surveyed 1,276 dog owners who owned dogs of various sizes and discovered that overall…

Now, of course, all of these things could have something to do with the training that these little dogs received. However, it’s also true that all three of these factors can easily trigger aggression.

Personally, I haven’t come to any decision about the size of a dog and them being aggressive… I see it very much like people, there is not much correlation with aggression and a person’s size…As far as I am aware there are just as many aggressive big people as small!

When it comes to dogs, the good news…

With proper training these behavioral issues can be curbed, leaving you with a calm and relaxed pup—regardless of your dog’s size.

So if you have a dog that is struggling with any of the issues listed above, I highly recommend you check out this post about my program, The Dog Calming Code.

This program provides kind, gentle, and effective solutions for resolving behavioral issues that might lead your dog to act aggressively.

Misconception #3 – Breed Determines How Aggressive a Dog May Be

Last, but not least, the BIGGEST misconception is that your dog’s breed determines how aggressive a dog will be.

Once again, this idea is falsely skewed based on stereotypes and a lack of information provided about a dogs background.

The breed is like the race of a person. There are calm, gentle and aggressive, violent people in every race. Think about it, can you really generalize an entire population of people? English, American, French, Italian, Egyptian, Chinese. There are so many variations within every nationality and so it is with the dog breeds.

For example, one of the most stereotyped breeds of dogs is the Pitbull. It’s assumed that this breed is aggressive and—to be fair—of course, there are cases out there that deal with injuries and even deaths related to PitBull attacks.

But here’s what the media isn’t always telling you…

Many of these attacks occur because this breed is often purposely treated poorly and are sometimes trained to fight and be aggressive.

The dog’s behavior has very little to do with the breed itself, and so much more about the way the owner treats the dog.

Take the same dog that was trained for dog fighting and put him in a different loving, nurturing environment as a puppy, and he’d be a totally different animal.

Not convinced? Here’s some enlightening information from a study conducted by Rachel Casey, a researcher at the University of Bristol’s School of Veterinary Sciences…

“Casey sent out 15,000 questionnaires to dog owners. About 4,000 people sent them back. Analyzing their responses, Casey found that certain traits of an owner said more about a dog’s aggression than the dog’s breed could.

“Owners who trained their dogs using punishment and negative reinforcement wound up with twice as likely to be aggressive towards strangers, and three times as likely to lunge at family members.

“These data suggest that although general characteristics of dogs and owners may be a factor at population level, it would be inappropriate to make assumptions about an individual animal’s risk of aggression to people based on characteristics such as breed,” the researchers write.” 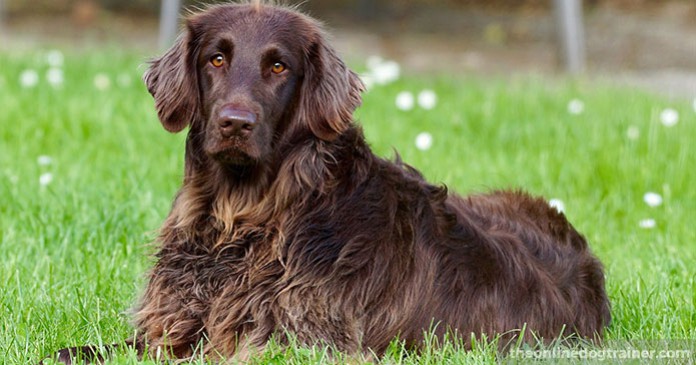 We’ve just debunked some of the biggest misconceptions surrounding what makes a dog aggressive.

Now that we know it’s not breed, size, etc., that makes a dog aggressive.

So what is it?

Well, I want to leave you with a quick summary of what I believe to be the 3 biggest factors that lead to aggressive canine behavior.

Dog’s need guidance in order to learn what behavior is acceptable and what’s not going to be tolerated. This is especially true around other dogs.

This guidance should be given in the form of training as a puppy ideally—training that should continue to be carried out through the dog’s entire life.

However, even if you have missed out on this opportunity you can still implement it at a later stage when your dog is older. Ensuring that they know you are in charge is a crucial part of dog ownership, from this position you can gently guide them and show them the way.

To do so check out my foundation program: THE DOG CALMING CODE

(If you have a puppy, my Puppy Coach training program might be a better fit for you!)

Without these boundaries, it’s easy for dogs to become anxious and overwhelmed—behavioral characteristics that often lead to aggressive outbreaks.

Furthermore, it’s vital that the boundaries you put in place teach your dog that you are the provider or leader.

Once these boundaries are established, it’s much easier for your dog to follow your lead, listen to your direction, and not feel like he/she has to be in control.

Factor #3 – Lack of exercise and stimulation

Finally, pent up energy and a lack of stimulation can easily lead a dog to become aggressive.

After all, if your dog has no outlet to release his tension, all the energy can build up, causing him to behave in ways he normally wouldn’t.

Don’t let excess energy cause your pup to become frustrated and aggressive. Make sure you provide him with at least 30 minutes of exercise per day.

Do you need help with your dog’s aggressive behavioral issues?

If so, I invite you to check out my foundation program: THE DOG CALMING CODE

Dog Health: What You Need to Know About Heartworm Prevention

Dog Nutrition: The Best Vegetables to Incorporate Into Your Dog’s Diet…And what NOT to add!

The Ultimate Guide to Dealing with Dangerous Dog Aggression Issues