Dog-On-Dog Aggression Solved: Transforming Two Dogs Who Tried to Kill Each Other - The Online Dog Trainer

Dog-On-Dog Aggression Solved: Transforming Two Dogs Who Tried to Kill Each Other 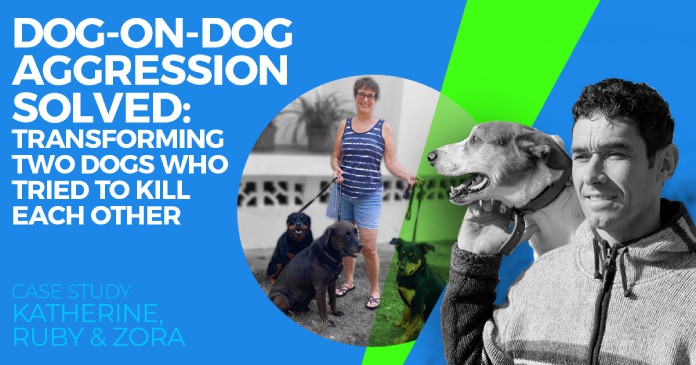 Dog-on-dog aggression is a serious behavioral issue that many dog owners face when bringing a new canine into their home.

If you’re struggling with dog-on-dog aggression in your home, I want you to know two things. First, you are not alone. Second, there IS a solution that can help you put an end to your dog’s aggressive tendencies so your pup’s can live peacefully in your home together.

In just a minute I’m going to share an amazing story from one of our customers who was dealing with dog-on-dog aggression in her home and how she solved the problem. But first, let’s take a quick look at why your dog might be exhibiting these behaviors…

Why Dog-On-Dog Aggression May Be Occuring in Your Home

Before moving on to the solution of fixing dog-on-dog aggression, it’s important to understand the psychology of why your pup might be exhibiting aggressive behaviors.

Here’s a quick breakdown of some of the reasons why this might be happening…
And YES your dog may be aggressive because of a combination of ALL of the following reasons.

Both wild and domesticated dogs follow pecking orders. More submissive dogs rank lower in the pack, while more dominant dogs tend to lead. Where there is no clear leadership or decision maker then the dogs are left to decide!

Most dogs are able to sort out their pecking order quickly without violence. However, in circumstances where you bring together two very dominant dogs this can be more of a challenge.

When both dogs believe they are in control, it compels them to fight to become “top dog.” If neither dog submits, this can lead to a long road of aggressive and dangerous interactions between both dogs.

The Solution: If you know how to communicate to the dogs that you’re in charge, then the problem can be swiftly sorted.

Many dogs act aggressively out of fear.

This is incredibly common with shelter dogs or dogs who have been left to fend for themselves. Introduce a new dog into your environment and suddenly your once peaceful, gentle pup is scared that their territory is being invaded.

The fear of food being limited or your dogs safe space being taken over can be enough to sometimes compel a dog to lash out in order to get rid of the new intruder.

Solution: The more you can establish yourself as the confident provider and the one in charge, the more your dogs can relax and stop worrying! Analogy: When you have a strong leader in a company everyone is happy and there is no infighting, instead everyone relaxes.

Many dogs become stressed due to the fact that they don’t really understand the human world. When the doorbell rings, dogs can easily misunderstand what’s going on. The idea that he’s delivering a pizza doesn’t cross your dog’s mind and can stress him out. See it through the eyes of your dog.

When the stress levels in the houses build the dog’s can soak up all the stress and it has to go somewhere–often it is redirected on to each other.

The solution: You’ve got to understand the impact stress can have in your home, and know how to create a calm energy so your dog’s can relax and shut off.

Finally, a lack of training can very easily become the source of dog-on-dog aggression.

Most of the time, it happens due to us humans not having enough training under our belts. For example…

…can all play a part in how your dog interacts with other animals.

Solution: If you know how to train your dogs to listen to you, come when called, walk when asked and behave calmly around other dogs you will find everything goes a lot smoother than if the dogs are out of control..

The good news…no dog is un-fixable…and Ruby and Zora’s story on aggressive dominance proves just how powerful adopting a training program for dogs who are dealing with dog-on-dog aggression can be!

Let’s take a look at their story provided by their amazing owner, Kathrine Fisher. 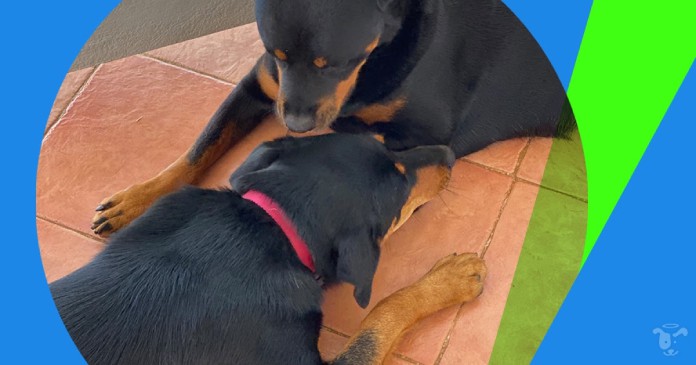 When I got my second dog, Ruby, a Rottweiler, six years ago as a pup, I found Doggy Dan online and used my new knowledge to train her and integrate her into my current pack, which consisted of my four-year-old Rottie-Boxer-Lab mix Zora and Ruby. Ruby was shy and very alert (she let’s me know if a hair is out of place anywhere on the property), but otherwise is a calm, intelligent and easy going dog.

Flash forward a little while and into the story enters Zora, a Rottie-German Shepherd mix pup who joined the pack at 2 months of age a year and a half ago. She’s a bright, energetic, confident, and very responsive dog who is very attached to me.

Zora was easily trainable and very cooperative and playful. But last fall, when she was just over a year old, her dominant nature began to come out, and she started challenging Ruby at every turn.

Ruby, being a good deal heavier and stronger, would get sick of this and snap at her. I didn’t think much of it (I figured they’d work it out between themselves), but the aggression kept ramping up until a few months ago–egged on by Zora–the two females got into a really serious fight.

I removed Zora and with some food distraction down in the yard, the fight ended, and I was able to corral each of the females separately and examine them for injuries. They had each deeply punctured the other dog’s throat. I have no words for how terrible I felt.

Remembering Doggy Dan, and knowing I had to do something or lose one of my beloved dogs, I re-subscribed to The Online Dog Trainer and began to implement the 5 Golden Rules (his foundation program which is now called The Dog Calming Code).

I quickly recognized that one of the main things I’d been doing wrong was feeding the dogs each morning just before I ate my own breakfast. I reorganized my morning routine to walk the dogs, as usual, (one lady on each side of me, leaving Zora behind – he’s gotten very stiff and slow), but then instead of feeding them, I now take my breakfast out onto the verandah (I live in rural Jamaica, and the dogs and I share the verandah all day, but they are outside dogs otherwise), eat it, and then go feed them.

In addition, I became disciplined about giving them no attention when reuniting after a separation until they’d been calm for at least 5 minutes. This was something else I had not been rigorous about – puppies are so irresistibly cute!

I made sure all attention was only on my terms, and I became more disciplined about dealing with Zora’s danger barking at the gate – I now frequently give him a time out in the garage when that behavior crops up. I also used a short line on Zora to be able to catch her whenever I could sense her level of excitement and dominance ramping up.

I also took the time to reflect on my own energy…

As part of the therapy that helped me recover fully from Chronic Fatigue Syndrome, I learned to meditate, centre and calm myself. This has made using calm energy around the dogs much easier and more natural.

I still need to remind myself sometimes, though. Zora still challenges my leadership at times – she will occasionally jump up on me (gently) when I come to let them out into the yard in the early morning. She often wants to walk with a taught leash – not actually pulling, but wanting to take the lead on the walk, being on high alert for animals (we now walk outside the yard at least part of the time). It’s helpful to recognize that training is a process we (me and all of my dogs) are all a work in progress!

Within weeks using the Dog Calming Code and reevaluating my own energy, I couldn’t believe the transformation! Now that they all know I’m in charge, they don’t have to fight with each other. Ruby and Zora have become best friends again, chasing one another around the yard, wrestling, grooming each other, and napping peacefully alongside one another.

Their wounds have healed, both physically and psychologically. Zora still wants to dominate and test her boundaries, but she’s learning. Where a few months ago, I couldn’t pet Ruby without Zora getting aggressive, now I can call either one of them over for attention without worrying about the other one.

I am so relieved and happy whenever I think about where they were a few months ago and see where they are now. There’s still more work to do, but the 5 Golden Rules are transformative! (And, by the way, I’m the only person in the house and I’m 70 years old. Any two of the dogs definitely outweigh me!)

The Dog Calming Dog: A Once-and-for-All Solution to Dog-On-Dog Aggression 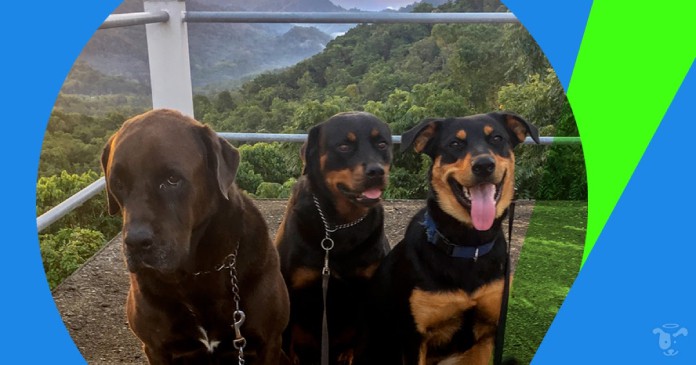 It doesn’t matter where the root of your dog’s aggression problems stem from (fear, dominance, stress, or lack of training.)

If you’re struggling with the dog’s in your home, putting in place a solid training program–like my Dog Calming Code program–is the answer to getting rid of your dog’s aggressive tendencies forever.

The Dog Calming Code (which provides the 5 Golden Rules talked about in this story) is a program that anyone–regardless of your age, size, or experience with dog training–can use.

If Kathrine, a 70-year-old woman with large breed dogs, can do it…so can you!

Give your dog (and yourself) the gift of peace and calm while putting The Dog Calming Code in place today! 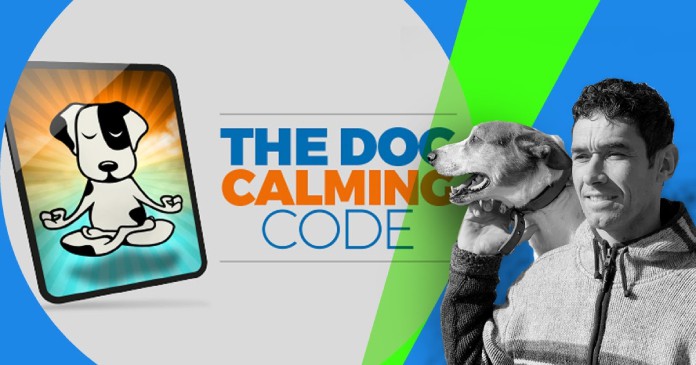 Of course, before I wrap things up, I want to remind you once again how serious dog aggression can be. While I know my dog training program is powerful enough to end the aggression in your home, it’s ALWAYS important to treat aggression as a serious issue.

It’s ok to use tools–like a kind and gentle Baskerville muzzle–to keep yourself safe while training. And, if you’re not confident enough or physically able to train your dog, it’s ok to ask for help. Just be sure to introduce whoever you’re asking for help to my program so everyone is on the same page!

In incredibly rare situations, it’s possible that you might have to remove a dog from your home, for the safety of yourself and your other animals. However, if you’re willing to put in the time and effort, this hopefully won’t have to be an option for you.

Thanks again for sharing your incredible story Kathrine, and I wish you the best moving forward!

CBD Oil for Dogs: The Key to Training “Untrainable” Dogs

How To Become a Dog Trainer: Finding Stability in a COVID-19 World

Jumping Dogs: How to Keep Your Pup from Jumping on House Guests

How to Safely Socialize Your Dog with Other Household Pets